A block party? A picnic? A fete? There are many ways you can meet your neighbours during the 9 th edition of Gdansk Neighbour Days. This year the neighbours are again sending their recipes to be published in a special cookbook. The meetings will be organised from 26 May to 30 June. Sign-ups from 4 May at: www.gdansk.dnisasiadow.pl.

The city of Gdansk, the CCI, Gdańsk Community Foundation, and Gdansk Foundation are proud to announce that, starting from 4 May, you can register the events to be organised in your neighbourhoods. Private persons, institutions, and organizations making submissions to Gdansk Neighbour Days get a free starting package: the ‘how-to’ guide, some posters and invitation cards, garlands, t-shirts, balloons, cups, plates, bags, visiting cards, the second Neighbour Days cookbook, and gifts for kids.

‘It is the ninth time the Neighbour Days are organised in Gdansk and its vicinity.Thelargest so far, the 2016 edition had as many as 221 meetings organised for over 25 000 participants’’ says Anna Urbańczyk of the CCI.

You can register online at: www.gdansk.dnisasiadow.pl and at the CCI (ul. Długi Targ 39/40). When you have submitted your event, you will receive a starting package. If you decide to share some photos taken during a meeting complete with a brief overview, you may win shopping vouchers. The packages can be collected at the CCI.

‘For a couple of days before our meeting, we had been preparing the event. We hadwritten and distributed the invitation cards from the CCI among our neighbours. We had also put up the posters in the busiest spots in Biskupia street.’ say the people behind the Biskupia Górka segment of the Neighbour Days. Neighbour cookbook – second edition

The second edition of the cookbook contains 126 recipes submitted by the participants of Gdansk Neighbour Days, and the president of Gdansk. ‘A simplegesture, that is inviting your neighbours over for a meal, removes the barriers of age or ethnicity. The second cookbook has been published to make it easy and fun to have a meal together. You cannot buy the book; you can only get it if you participate in the Neighbour Days,’ says Katarzyna Mejna, one of the editors.

This year’s edition contains the authors’ photographs as well as drawings of vegetables, fruit, and other paraphernalia, and the stories accompanying the recipes. The book will have something tasty for traditionalists, vegans/vegetarians, and those looking for something healthy to satisfy their sweet tooth. Again, at the end of the book, you will find labels for jars of pickled foods you prepare for the winter months.

Local energy – power of neighbourhood with EDF Polska was a competition held by Gdansk Foundation and aimed at distributing micro grants to support various grass roots initiatives related to the Neighbour Days. Project applications were to be submitted until 30 April. The maximum budget for each of them was 500 PLN. The projects were to integrate small communities and improve their standard of living.

The selected 39 projects will be carried out from 26 May until the end of June. The projects submitted include a mud kitchen, homes for insects, benches with personalised plaques, repainting staircases, or combining individual backyard gardens into one, big green area. Applications came from all corners of Gdansk. Awarding the grants implies registration as a participant in the Neighbour Days.

Neighbours having fun together may be celebrating their joint efforts. ‘As much as 50% of the applications selected are new initiatives form new groups of neighbours who will contribute to this year’s Neighbour Days,’ says Paweł Buczyński of Gdansk Foundation.

Neighbours meet for afternoon tea at the CCI: live music, cooking workshops, and tasting dishes from the second neighbour cookbook.

‘On 26 May, we are starting Gdansk Neighbour Days at the CCI. At 6 pm, afternoon tea starts for the neighbours and the friends of the CCI. With live music from Kasia Rogalska Classic, we will be making organic scented sachets for home, having fun with the cooking workshops Micha dobra! (A bowl of good!), and tasting dishes from the second cookbook,’ says Anna Urbańczyk of the CCI. Admission: bring your own dish.

The Neighbour Day idea started in France in 1999. The members of the European

Federation of Local Solidarity (EFLS) noticed that people had been losing touch with one another and social bonds had been weakening. The holiday was to counteract that tendency and help people get to know each other. The idea turned out to be a success – from 2004, the holiday has been celebrated across Europe.

The idea first came to Gdansk in 2006. Danuta Poczman with the Stara Oliwa society was the first to organise a meeting with her neighbours. In their current form, Gdansk Neighbour Days have been organised since 2009.

More info and stories from previous editions at: www.gdansk.dnisasiadow.pl. 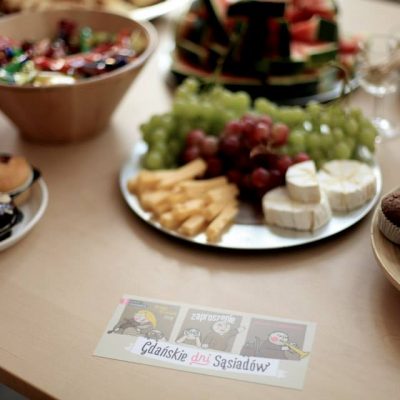