The 10th edition of the NARRACJE Festival will take place on 16–17 November in Gdańsk’s Oliwa district. The festival’s motto is a fragment of a poem composed in the Oliwa Park by Rainer Maria Rilke: The silent suns were like a giant zenith of a song. NARRACJE provide a reason to get out of the house on two November evenings and rediscover the city thanks to artistic interventions and installations. The festival’s jubilee edition is organized by the City Culture Institute in cooperation with the Gdańsk City Gallery, whose director, Piotr Stasiowski, is this year’s curator.

On 23 July 1898, an “arbour surrounded by beech trees” in the Oliwa Park witnessed the following event. The young Rainer Rilke, together with his friend and fellow writer Lou Andreas-Salomé, are inventing the ending to one of Rilke’s poems: “Just look at how life keeps lingering on / before taking a turn. The silent suns / were like a giant zenith of a song. / Then the hillsides woke up: do you hear, though? – / this fear is what you’re left with all at once”. A plaque commemorating the moments described in Rilke’s journal was unveiled in the park in 2016. We may only imagine the weather of this sunny summer’s day reflected in the lines of the poem.

The unique character of the district is intrinsically connected with its rich past and unique location on a wooded hill that frames the local landscape. In the 12th century, the area was handed over to Cistercian monks, to whom today’s Oliwa owes not only its name, cathedral and representative park, but also the long-standing efforts to develop the settlement. Removed from the historical Gdańsk and situated among forests, it became a dream refuge for rich burghers who would build their summer residences here.

“What image do we see when we analyse the elements that constitute the unique nature of this district? What can be moved to the forefront of this part of the city, which is far from the centre and creates its own micronarratives? Are we willing to submit to Rilke’s lyrical vision or will we direct our attention to the changing social tissue, encompassing the inhabitants who often settled here after World War II, school and university students, employees of local companies and tourists wanting to see the famous organ and park?” wonders Piotr Stasiowski, curator of the 10th edition of NARRACJE.

Piotr Stasiowski’s curatorial concept refers to the theory of Bruno Latour, who offered a parallel, though equally valid way of looking at the city, defined as “an ant’s view”. ANT is an abbreviation of actor-network theory. Latour points out that when we live in a specific place and time, we experience various emotions and events that criss-cross to make a network of connections.

“The aim of the 10th jubilee edition of NARRACJE is the very attempt to arrive at an all-encompassing interpretation of Oliwa. The invited artists will be expected to reveal to the viewers the broader context that gives new meanings to what may otherwise seem obvious. Apart from visual artists, the festival’s guests are also going to include an architect and a sociologist, who will try to pinpoint the most interesting elements of the district from the standpoint of their knowledge and professional experience. Adopting an ant’s view, like the viewers, they will take a closer look at individual aspects of the complex tissue of Oliwa: its past, present, everyday problems and perspectives for the future. Perhaps thanks to artistic interventions we might be able to rediscover this part of the city and look at it as if it was reflected in a mirror. Rilke and Lou Andreas-Salomé wrote here about suns – we are going to look at Oliwa after dusk, on a November evening, when everything will look differently”, says the curator.

“I would like to thank all artists for the proposals they sent. The analysis of the works brought it home to me just how interesting and diverse a district Oliwa is, and how many emotions one may associate with it. A number of proposals referred to the complex history of the place and the private experience this gave rise to. They convinced me about the existence of Oliwa’s conscious social identity and the undoubtable pride associated with it. In our selection, we tried to focus on works that not only relate to the specific nature of the district, but are somewhat universal, able to resonate with many of us. I was greatly surprised by the creative interpretation of the subject of this year’s edition, informed by Rilke’s poem that may be read as one walks around the Oliwa Park. I would like to congratulate all artists who responded to the open call on their amazing imagination!“ says Piotr Stasiowski, curator of the 10th edition of NARRACJE.

Piotr Stasiowski (b. 1980) is a graduate of Art History of the University of Wrocław and Postgraduate Curator Studies of the Jagiellonian University. In 2006-11 he headed the BWA Studio at the BWA Wrocław Contemporary Art Galleries. Between 2012 and 2014, he was the main curator of the Wrocław Contemporary Museum. In 2015 he was appointed director of the Gdańsk City Gallery. As a curator, Stasiowski prepared over 40 solo and collective exhibitions; he is the author of texts published in exhibition catalogues, books and art magazines. He comes from Jarosław and currently lives and works in Gdańsk.

NARRACJE have been exploring urban threads and stories since 2009. Artistic interventions in the public space of Gdańsk’s many districts introduce a new context to everyday places, allowing the inhabitants to see them in a new light. The festival takes place in the autumn, when most cultural events are located within galleries and institutions. NARRACJE provide a reason to get out of the house on two November evenings and rediscover the city thanks to artistic interventions and installations. 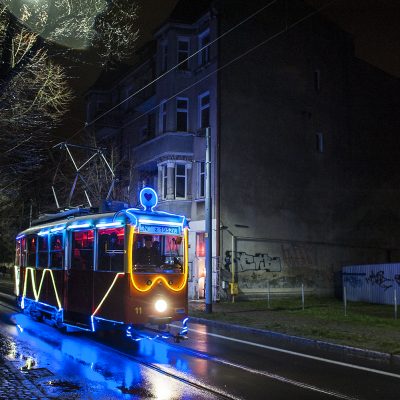