What did overhead crane operator do? What was the women’s role in the famous strike in August 1980? Were women proud to be workers? What kind of social benefits did they get in the shipyard and how did the enterprise cultural life look like?

Find answers to these and many more questions on the “Metropolitanka” Shipyard tour. The “Metropolitanka” project shares stories of women working in the Gdańsk Shipyard as overhead crane operators, engineers, cleaners and office administrators. Get to know how the work affected their lives. Listen to the story of rebellious female crane operators and brave female “Solidarity” activists.

Gdańsk Shipyard was established in 1945 and had several thousand employees (around ¼ of them was women). More than 1000 vessels were built here (passenger and container ships, trawlers, fishing boats, general cargo vessels and sailing crafts). The shipyard cooperated with many subcontractors and many innovative solutions in the field of shipbuilding was implemented here. It was here, in Gdańsk Shipyard, that the fall of the communist regime began. How favorable conditions should have occurred that men and women despite background, gender and educational differences stood up together to fight for their rights and inspired others, so that strikes spread across the country. But the future was not bright for the shipyard itself and in 1996 the enterprise was declared bankrupt.

English-speaking inhabitants of Pomerania are especially welcome to the tour.

In anticipation of high attendance more tours will be organized.

Meeting point: Gdańsk, Solidarity Square, Shipyard’s Gate no 2 (by the Monument to the Fallen Shipyard Workers)

Guide: Agnieszka Chylińska – grew up in little coastal town of Krynica Morska, moved to Gdańsk in 2003 as a high school student and fell in love with Tricity. She graduated from University of Gdańsk (master in Cultural Studies and bachelor in Scandinavian Studies) and works now in branch office of a Norwegian publishing house in Sopot. In her spare time she likes to wander around Tricity looking for its mysteries. She tells Shipyard’s herstories in Polish, English and Norwegian. 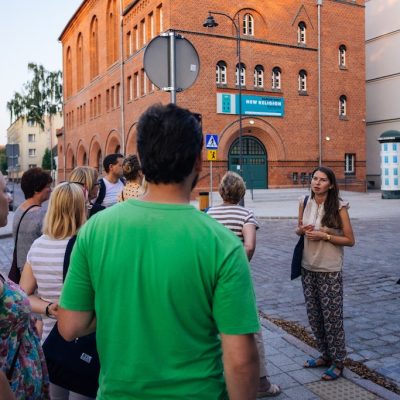